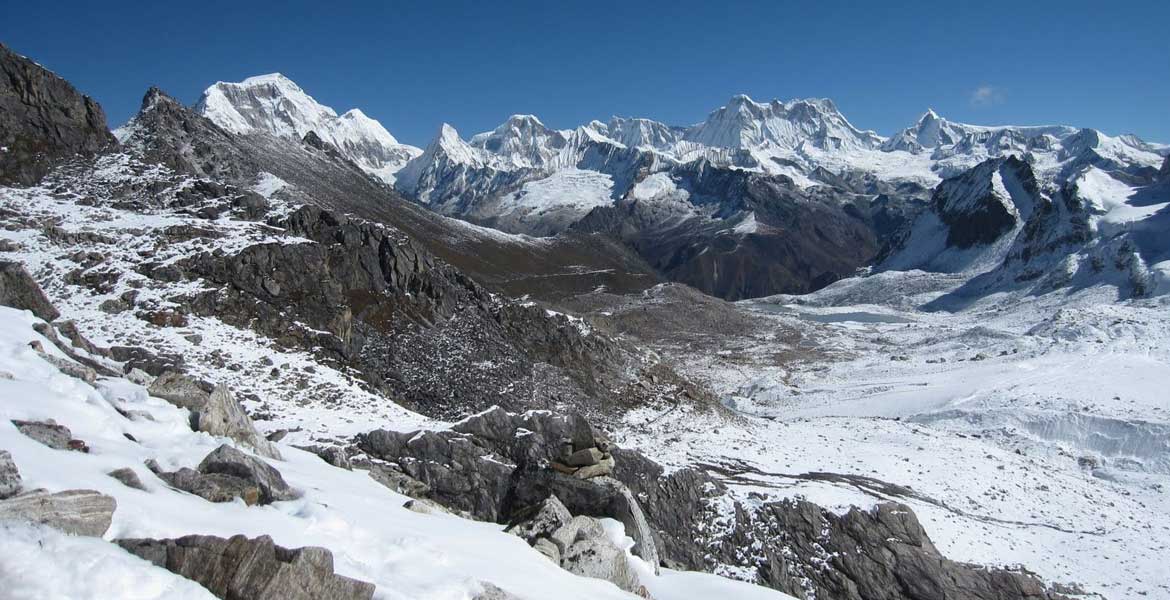 You local escort will receive you at the Paro airport and take you to the Hotel. After freshening up, you will be taken for a tour of Paro town including the ruins of Drukgyel dzong and Kycihu Lhakang.

You will be taken for a hike to Taktshang or Tiger’s nest, an uphill walk of about three hours. This hike is basically done to accustom trekkers to the mountain altitude of the Himalaya. The Tiger nest, precariously perched on a cliff, will also offer a spectacular view of the Paro valley besides visiting the inner sanctum of one of the most religious sites of the country.

Distance: 17km
Time: Four to five hours
Ascent: 360m
Descent: 80m
Camp altitude: 2,850m
The trek begins from the Drukgyel Dzong (2,580m) road point. It is a gentle climb along the Parochhu. The trail passes through green meadows, paddy fields and traditional Bhutanese farm houses. After about four hours trekking, you will reach the army outpost at Gunitsawa village where your guide will provide permits. You will have to walk to the other side of the river, not far from Gunitsawa, to the campsite.

Distance: 22km
Time: seven to eight hours
Ascent: 770m
Descent: 10m
Camp altitude: 3,610m
This is a long trek that involves walking uphill and downhill at short intervals. After climbing uphill through the river valley, you will enter the Jigme Dorji National Park. The valley narrows down to a single path that descends to a meadow. The camp will be set up here. This is a right spot for the camp as you will be able to see Mount Jomolhari on a clear day.

Distance: 19km
Time: five to six hours
Ascent: 480m
Camp altitude: 4,080m
You resume the trek early in the morning. The trail continues uphill across alpine meadow and stunted vegetation. Along the trail, you will be able to view Mount Jomolhari. You will come across an army outpost on the way, yak herders homes, and will enjoy the view of beautiful snow clad mountain peaks and ridges. The trail passes through the highland villages of Soe, Takethang and Dangochang. Here you will be able to experience the typical lifestyle and culture of highlanders. You will continue till Jangothang, the campsite at the base of the majestic Mount Jhomolhari, the abode of the protective deity Jomo.

A day will be spent at Jangothang. Short hikes offer the opportunity to see lakes and various other mountain peaks like Mount Jomolhari and Jyichu Drakey. There are also possibilities of sighting blue sheep. There are good short hiking trails in three directions. Jumolhari and it’s subsidiary mountain chains lie directly west, Jyichu Drakey to the north and a number of unclimbed peaks to the east.

Distance: 18km
Time: six to seven hours
Ascent: 840m ascent
Descent: 870m descent
Camp altitude: 4,010m
After the day’s halt, you will resume the trek. The trail from the camp ascends through a steep ridge for about half an hour. After that it is a gradual downhill walk to the Nyilila pass at 4,870m. From here, you will be able to view Mount Jomolhari, Mount Jyichu Drakey and Tsherimgang, all above 7,000m. Along the trail, you may also sight herds of blue sheep grazing on the slopes. The downhill trek will take you to Lingshi basin. Along this trail you will also come across yak, yak herders and their homes. You will also see Lingshi dzong on a clear day. You will halt at the campsite before you reach Lingshi dzong.

Distance: 10km
Time: five to six hours
Ascent: 280m
Descent: 410m
Camp altitude: 3,880m
It is going to be an easy day of walking. So relax. Shortly after reaching the Chorten below Lingshi dzong, you have the choice of staying on the main trail or taking the diversion that leads to the Lingshi Dzong(4,220m), which sits right atop a ridge. Lingshi dzong offers a serene view of the valley. As you conitue the trek, you will pass through the villages of Lingshi and Goyul. The campsite at Chebisa at the backdrop of the village and beautiful waterfall, you can get time to visit the village and interact with the communities.

Distance: 17km
Time: six to seven hours
Ascent: 890m
Descent: 540m
Camp altitude: 4,220m
The trail goes through a wide pastureland towards Gobu La pass at 4,410m. After crossing the pass, you will descend to the valley, from where you will again climb a little after which the trail descends to Shakshepasa (3,980m) where a helipad has been built. You will again climb till the campsite at Shomuthang located above a river, a tributary of the Nochu river.

Distance 18km
Time; six to seven hours
Ascent: 700m
Descent: 760m
Camp altitude: 4,160m
You will start early as the going is quite tough along this trail. You will climb up the valley and almost after two hours, you will reach Jhari La at 4,750m. From here, you will be able to see Sinche La, the pass you will have to cross the day after. You will also see Mount Gangchhenta (6,840 m) also known, the Great Tiger Mountain. On a clear day, you will also be able to see Tserimgang and the peak of Mount Jumolhari. You will walk down to Tsheri Jathang. This valley is the summer habitat of Takin and rightly declared as the Takin sanctuary. From here you will climb uphill to reach the campsite at Robluthang.

Distance: 19km
Time: six to seven hours
Ascent: 850m
Descent: 870m
Camp altitude: 4,140m
After crossing Sinche La (5,005m) – the highest pass on the route, you will head towards Laya. On the way you will come across Laya women clad in their traditional attire weaving. From here you can catch the view of a glacial lake at the foot of the valley and a terminal moraine. The descent will continue, and after crossing Kango Chhu reach Limithang campsite. From the camp, the peak of Gangchhenta is visible.

Distance 10km,
Time: four to five hours
Ascent: 60m
Descent: 340m
Camp altitude 3,840m
The trail continues to descend, along a narrow river valley and leads to a dense forest. The trail continues on the west side of Laya village from where you can view Gangchhenta and Masagang. The campsite is below the school in Laya.

You will take the day off and rest in Laya. You will engage in short hikes, visiting the community school and meeting layaps. The interaction would enrich your understanding and knowledge of these people’s lifestyle, culture and traditions.

Distance: 19km
Time: six to eight hours
Ascent: 1,030m
Descent: 750m descent
Camp altitude: 4,160m
From Laya, the trail descends to an army camp and follows the river until the turn off point to Rhoduphu. After lunch, the climb continues through rhododendron bushes till you reach the camp at Roduphu, next to the Rhodu Chhu.

Distance: 17km
Time: five to six hours
Ascent: 740m ascent
Camp altitude: 4,900m
The trail follows the river for about half an hour after which it climbs up to an open valley at 4,600m and further up to Tsomo La at 4,900m. From here, you can have a spectacular view of Lunana, Mount Jomolhari and Jyichu Drakey, and the Tibetan border on the other side. The trail then crosses a flat, barren plateau at about 5,000m. The campsite at Narethang is towered by the peak of Gangla Karchung (6,395m).

Distance: 18km,
Time:five to six hours
Ascent: 270m
Descent: 1,200m
Camp altitude: 3,970m
From the campsite, the trail climbs up for about an hour to Gangla Karchung La. From this pass at 5,120m, you will have a magnificent view of the Jekangphu Gang (7,100m), Tsenda Kang and Teri Gang (7,300m). The trail then descends along a large moraine, and continues downward through thick rhododendron vegetation to Tarina valley. You camp along the Tang Chhu.

Distance: 17km,
Time: six to seven hours
Ascent: 270m
Descent: 330m
Camp altitude: 3,910m
The trail runs through conifer forests on the upper ridges of the Pho Chhu. Along the way, you will come across beautiful waterfalls. The trail ascends over a ridge and then descends to Woche, the first village in the Lunana region.

Distance: 17km
Time: six to seven hours
Ascent: 980m
Descent: 1,190m
Camp altitude: 3,700m
The trail continues through juniper and fir forests, and further through rhododendron bushes. The route ascends to Keche La pass at 4,650m from where you can have spectacular view of the mountain ranges. The trail then descends to the riverside and through a village from where you can see the table mountain. The trek continues up the riverside till the village Lhedi.

You will walk few hours to reach Thanza village where you will take the day off.

Here you will be able to walk around the village, interact with local people and experience the highland culture.

Distance 8km
Time: three to four hours
Ascent: 80m ascent
Camp altitude: 4,230m
The trail climbs up to a large boulder from where you will have excellent view of Thanza, Toencha and Choso village and the mountains. The trail is relatively easier and after few hours of walking through almost flat area, you will reach a meadow with a few yak herders’ huts. Near the campsite, there is a trail junction – one route leading to Gangkhar Puensum base camp, and the other to Bumthang or to Sephu in Trongsa.

Distance 12km
Time: five to six hours
Ascent: 980m
Descent: 240m descent
Camp altitude: 4,970m
This trek will follow the route to Sephu. The trail crosses through the creek and after a long climb, reaches Jaze La at 5,150m. After the pass, the trail descends to the campsite near Tshochena lake. Along the way, you will come across several lakes.

Distance 14km
Time: four to five hours
Ascent: 230m
Descent: 150m descent
Camp altitude: 5,050m
The trail go along the banks of the blue green lake before arriving at a ridge at 5,100m from where you can have a spectacular view of the mountain ranges. The trail then ascends and descends over small hills and reaches a glacial lake. After that, the route descends and then again ascends to first Loju La at 5,140m. Finally after crossing a small saddle (5,100m) you will enter a wide glacial valley from where the trail descends gradually to the campsite at Jichu Dramo.

Distance: 18km
Time:five to six hours
Ascent: 320m
Descent: 730m
Camp altitude: 4,600m
The trail ascends through a moraine to the highest pass on the trek, Rinchen Zoe La at 5,320m. From here, you will have a panoramic view of Gangkhar Puensum. The route then descends into a wide valley with several lakes and further down along a moraine to the Thamphe Chhu. From here, you will be able to see trees. After a few hours of walk, you will reach the campsite at Chukarpo.

Distance: 14km
Time: five hours
Ascent: 330m
Descent: 1020m
Camp altitude: 3,610m
The route ascends steeply to the last pass on the trek, the Thampe La at 4,600m. Along the way, you may sight herds of blue sheep. After the pass,the trail descends to the sacred lake Om Tso. After passing a waterfall you will reach another, smaller lake 100m below. After that, you will descend steeply to the Nikka Chhu. The trail leads through mixed forest to large clearing on the banks of the river with a few yak herder huts, Maurothang.

Distance: 18km
Time: five to six hours
Descent: 990m descent
This the last stage of your trekking. The trail follows the Nikka Chhu and finally reaches the village of Sephu and to the road point at the Nikka Chhu bridge.

Early in the morning, you will be driven to Thimphu. On the way, you will visit the Wangduephodrang Dzong.

You may like to take rest after the tiring trekking. However, depending on your choice, you can visit certain historical monuments in Thimphu. You may also take a tour of the city and do some shopping.

You tour guide will see you off at the airport.