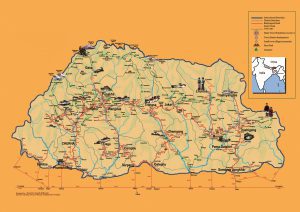 The kingdom of Bhutan is tucked in the eastern flanks of the Himalayan range, with Tibet (China) to the north and India to the south, east and west. A landlocked country, Bhutan remained in self-imposed isolation until the late 1960s. The heartland of Mahayana Buddhism, this mystical country is also known as the last Shangri-La. However, in the last five decades, Bhutan has progressed in leaps and bounds.

Bhutanese economy is largely agrarian in nature. With 80% of the population living in rural Bhutan, agriculture and animal husbandry is the mainstay of their daily sustenance.
The hydropower sector is the biggest contributor to the government exchequer. With abundant water resources, Bhutan has the total capacity to generate about 30,000 MW of electricity. Almost all the power generated is exporting to India.
Tourism industry is also a significant revenue earner. Bhutan’s manufacturing sector, although small, contributes significantly to the economy.
Bhutan’s economy is basically import based, with 80% of goods imported from Indian, other neighboring and third countries. The currency, Ngultrum, is pegged to the Indian rupee.
The five decades of rapid socio-economic development has transformed a medieval country into a modern, developing nation. At US $ 1,321, today Bhutan boasts of having the highest per capita in South Asia.

The existence of life in Bhutan can be traced back to as far as the Stone Age (8,000-3,000 B.C). Unearthing of Monoliths or namchag and dorings is an evidence of it. Namchag or stone axe is a stone weapon used for hunting animals and during warfare. Dorings were used for the demarcation of border and for performing certain religious rites.
In the medieval period, Bhutan was known as Lho Mon or the southern land of darkness. The arrival of Guru Rinpoche in 746 AD marked the advent of Buddhism in the country. In later centuries, many Buddhist masters from Tibet visited Bhutan, proliferating Buddhism.
The arrival of Zhabdrung Ngawang Namgyel, a great Buddhist master of the Drukpa Kagyud sect, in 1616, changed the course of Bhutanese history. He unified the country and established the dual system of governance.
After the death of Zhabdrung, his incarnations ruled the country but over the years, his authority was diluted by the emergence of powerful local chieftains. This period was marked by civil strife, power struggle and warfare between the regional penlops or governors who commanded and controlled certain areas of the country.
Trongsa penlop Jigme Namgyel also referred as the black deb, the father of the first king of Bhutan, emerges as the most powerful authority in the country. And eventually in 1907, his son, Sir Ugyen Wangchuck is enthroned as the first hereditary king of Bhutan. Thus follows the era of Monarchy that continues even today.

Bhutan’s geography stretches from the southern foothills and the inner Himalayas to the Great Himalayas in the north, bordering Tibet. The southern foothills rise from the great Indian plain and is covered with dense tropical forest. Climatic conditions are hot and humid. The inner Himalaya has a cool, temperate climate. The greater Himalaya is marked with alpine slopes covered with rhododendrons and snowcapped mountains.

About 72% of Bhutan’s area is covered with forest. The constitution makes it compulsory for the country to preserve 60% of forest coverage for all times to come. Bhutan’s forest is a home to a rich diversity of flora and fauna, making it one of the 10 Hot Spots of global biodiversity conservation in the world.
Bhutan is also home to many endangered wildlife like the black necked crane, white bellied heron, the elusive snow leopard, takin, golden langur and red panda among others including rare floral species. A part of the country’s conservation effort, so far there are nine national parks and four wildlife sanctuaries.

Bhutanese people comprise three major ethnic groups – Ngalops, Sharchops and Lotshampas. Ngalops or the people of the west are mainly of Tibetan origin who introduced Buddhism in Bhutan. Sharchops or the people of the east are descendants of tribes from north Burma and north east India. Lhotshampas or people of the south are ethnic Nepalese who migrated to Bhutan. Besides, Lhops or Doyas of Samtse and the monpas of central Bhutan are reckoned to be the oldest inhabitants of the country.
The ethnic diversity flourished due to geographical barriers that limited inter-ethnic exchange, until modernization was introduced in the mid 1950s. This also gave birth to as many as 19 local dialects, each valley with its own.
Nearly 80% of Bhutanese population resides in rural areas living off the land. Until the time when modern education was introduced, farming was the mainstay of people’s lives. However, now many educated Bhutanese work in the government and the private sector. There is a huge leap in the lifestyle as more and more people now live in urban and semi-urban towns, leaving their rural homes.

Mahayana Buddhism is the state religion of the country. Bhutan is considered the last bastion of this tantric form of Vajrayana Buddhism. While Buddhism is the main religion, Lhotshampas follow Hinduism.
Bhutanese culture and tradition are deeply rooted in and influenced by Buddhist values. Most Bhutanese start their day by offering water and prayers at the altar, which is a salient feature of every Bhutanese home.
There is a strong sense of community bonding among the people with basic social etiquettes like respect for elders and seniors. All Bhutanese wear traditional dress, gho for men and kira for women. Culture is a unique national identity that Bhutan continues to emphasize on.

Prior to the arrival of Zhabdrung Ngawang Namgyel in 1616, Bhutan was divided into different regions each ruled by local chieftains or powerful landlords. Zhabdrung unified the country under his authority and introduced the dual system of governance. Also known as choe syid, the Je Khenpo was the spiritual head while the Desi was the temporal ruler.
After Zhabdrung’s death, the subsequent incarnations couldn’t wield as much power as their predecessor, and eventually the Zhabdrung’s authority dwindled. This period was marked by the emergence of powerful regional leaders known as penlops or governors and constant power struggle among them.
Ultimately, after restoring peace and uniting all the warring faction under his authority, in 1907, the Bhutanese people unanimously enthroned Gongsar Ugyen Wangchuck as the first hereditary monarch of Bhutan. Since then, the Wangchuck dynasty has ruled the country over 100 years now, transforming a medieval country into a modern nation.
Exactly 100 years later, the fourth King, His Majesty Jigme Singye Wangchuck, abdicated his throne in favor of his heir and laid the foundation for the introduction of democratic parliamentary system. The historic political transition to democracy took place in 2008.

Gross National Happiness (GNH) is a unique development philosophy, propounded by the fourth king of Bhutan. GNH emphasizes the pursuit and achievement of happiness – a fundamental human desire – as the end of socio-economic development. In other words, GNH places happiness as the primary goal of development.
Understanding the fact that material growth necessarily does not translate into happiness, the GNH approach to development aspires to balance the spiritual and emotional well-being with material needs of individuals and the society at large. GNH recognizes the importance of economic growth as essential, but not an end in itself, to support and nurture the spiritual and social needs of the community.
GNH is the overarching philosophy that guides government policies and development activities in the country.

GNH lays utmost emphasis on sustainable and equitable socio-economic development by prioritizing social development as much as economic growth. Sustainable development is the core principle of any development activity as it ensures long term benefits, for the current and future Bhutanese generations. This is marked by huge government spending on social sectors like health and education. It is estimated that over 30% of the national budget of Bhutan is placed on the social sector. Development and conservation of environment goes hand in hand in Bhutan. The constitution itself states that the country must preserve 60% forest coverage for all times to come. Environmental conservation is valued widely throughout Bhutanese society as it is a source of livelihood as many Bhutanese depend on natural environment. Most Bhutanese accept the fact that the environment should be preserved for others and the future generation, limiting severe environmental degradation. The preservation of unique Bhutanese culture is essential especially at a time of globalization. Strong community feeling, family bonding and social harmony, Buddhist values of kindness and compassion, among others are fundamental characteristics of Bhutanese social fabric. It is widely believed that a decline in traditional heritage and culture will lead to a general dissatisfaction of society and has therefore preservation of culture is a high government priority. This is observed in the school system as all children are taught Bhutanese cultural values. Good governance is apparent through the government’s dedication in promoting happiness and well-being of its citizens. Access to public services have made been easier through the use of information and communications technology. Lot of emphasis has also been laid in creating a corruption free governance system.

Cities and Towns in Bhutan: